My husband really loves me. I know this because he accepts me with all the crazy ideas that come out of my head. Being from Texas, we have always cruised out of Galveston. We (really meaning I) decided we should do something different and cruise out of Florida for our summer cruise this past year. New cruise ship… New ports… New city to discover... Sounds perfect!

There was just one small problem. My husband has never flown. Never set foot on a plane or any other metal object that actually leaves the ground. That’s ok and all, but he also has an irrational fear of heights… Oh, and he also has a HUGE anxiety problem. This was 7 years after our first cruise and my trickery days are over so I said… “Guess what? WE are flying to Miami. You’ll be fine.” He initially agreed, but as the days started ticking by he started trying to formulate plans to DRIVE us.

Nope, babe… I can’t take 4 extra days off for us to road trip to Florida and back.

Nope, All 4 of us could fit in the truck, but the luggage would be uncovered in the bed. What if it rains or we stop to eat.

Yes, we could rent a car and drive straight though, but the extra expense to park it for 8 days or to leave it in a state we didn’t rent it from is the same price as flying.

Sure we can take Mom’s van…but it’s her company van and no one else can drive it. You can’t expect her to drive 22 hours by herself.

… and so this went on FOR WEEKS.

That’s when the thought of drugging him crossed my mind. I could suggest eating in the airport, ask him to go get me a napkin and slip something in his drink. Done correctly, I could get him on the plane and buckled in before he passed out. …. But what if my timing was off? I am 5’2 with my shoes on, I certainly can’t carry him.

So there we were. “Hey, Dude. We’re flying to Miami and though I have contemplated it, I can’t figure out a good way to drug you by surprise, so… suck it up buttercup. You’re going on your first plane ride.”

All I had to do was figure out a way for him not to freak out, get thrown off the plane, and go to jail… I got this.

We arrived at the airport and got our bags checked, stripped off our shoes and were awaiting the metal detectors. (Side Note: He wore flip flops and refused to bring a pair of socks like I had suggested… Eww) I look over and Mark’s backpack is being searched. (Shaving cream, lotion, cologne, a brand new $120 bottle of face cream) They have it all lined up there on the table. “Aww crap.”

(It appears I forgot to go over the “You can’t fly with that in your carry on list”) Sooo, our son had a little bag with his books and ipod in it. I shoved all his stuff in my bag. Then sock feet and all (no time to put tennis shoes back on) ran back out to “check” another bag filled with our (his) contraband. That little adventure got me placed in the back of the line, then re-routed through the full body scanner … then they searched my hair. That’s right… my hair… twice! (We ARE from Texas.) My son was behind them saying “Mom… what are they doing to your head?!” Your guess is as good as mine.

By this time, the plane is boarding. Trenton (his first plane ride too…but he’s totally excited!) got to meet the pilot and go in the cockpit. Really awesome for the crew to take time to do this by the way!

Mark wanted NO part of the cockpit… or the pilot… or the flight attendant. He made a beeline for his seat and sat there slightly pale and silent latching, tightening, testing and rechecking his seatbelt.

The rest of us got to our seats and got all situated. I whip out one of Mark’s anti-anxiety pills and a bottle of water. (I’m all for drugging him.) He says No, he doesn’t want to take it. He can do this, he needed to experience it to get over his fear and he would be fine. All that sounds macho and perfect…what I’m really thinking is “Umm Bu!!sh!t”, but I went along with it anyway.

As the plane takes off down the runway, Trenton and I are looking out the window when I caught a glimpse of Mark out of the corner of my eye. He is gripping the armrests, his knuckles are white, and he is completely pale. I whisper… please take that pill. He says No! I am thinking “Uh Oh, This can’t be good!”

By the time we reach the end of the runway and leave the ground he is profusely sweating. Sweat is literally running down his face and dripping onto his shirt. It was seriously like a scene from that old movie, Airplane.

(This is only comical looking back, by the way.) Finally, we were in the air and he realized he survived. Without medication. Whew! One small step for man… One giant leap for the Hunt family!

I got him all settled in, turned on his movie with ear phones … (Mark, not Trenton) and all was well.

… And then we hit turbulence.

Without warning, he bolted straight up in his chair… the movie player crashes to the floor, he grabs the seat in front of him and starts glancing around frantically for … I don’t know what. Just then the pilot comes on and asks everyone to return to their seats and put on their seatbelts. I calmly pry his hands off the poor man’s seat in front of him and say “There is someone sitting there, you can’t do that.”

This really is normal…

Yes, we are going to be fine…

No, the plane isn’t going down…

It has something to do with different air currents…

Please take that pill out of your pocket and swallow it!

What the hell, if it does go down at least we are all dying together!

(In hind sight, probably not the best way to attempt to calm someone down but I was running out of ideas)

This led to him frantically pushing the “attendant” button until he managed to flag down a flight attendant for her professional opinion of whether we are all about to die or not. Finally he realized, the flight attendants were starting to serve drinks, half the people were sleeping already, the other half were reading and not another soul on that plane cared that the plane was in turbulence. “Why, oh why, Lord can’t he have a smooth flight for the first time?! You know, if this goes poorly… we won’t be flying home from Florida!”

We got the movie player retrieved, got him to drink some water, eat a protein bar for a snack….and the family of 5 crammed in the 3 seats behind us had a kid that pooped their pants. I am sure of it! Mark kept saying “What is that smell?!” Seriously?? Welcome to flying honey!

So landing was a breeze, I whipped out the Big Red gum and all was well. Good news…. We can still fly home! LOL …. And I am still married ?

FYI: If you take a power strip on board the cruise ship with you, realize as you are leaving your cabin that you forgot to pack it in the luggage you checked last night, and in a hurry shove it in your husband’s backpack with the 3 iphone chargers still plugged into it…. Going through the xray scanners at the airport…. It looks suspiciously like a bomb and can hold the line up for a while. Sorry babe ? 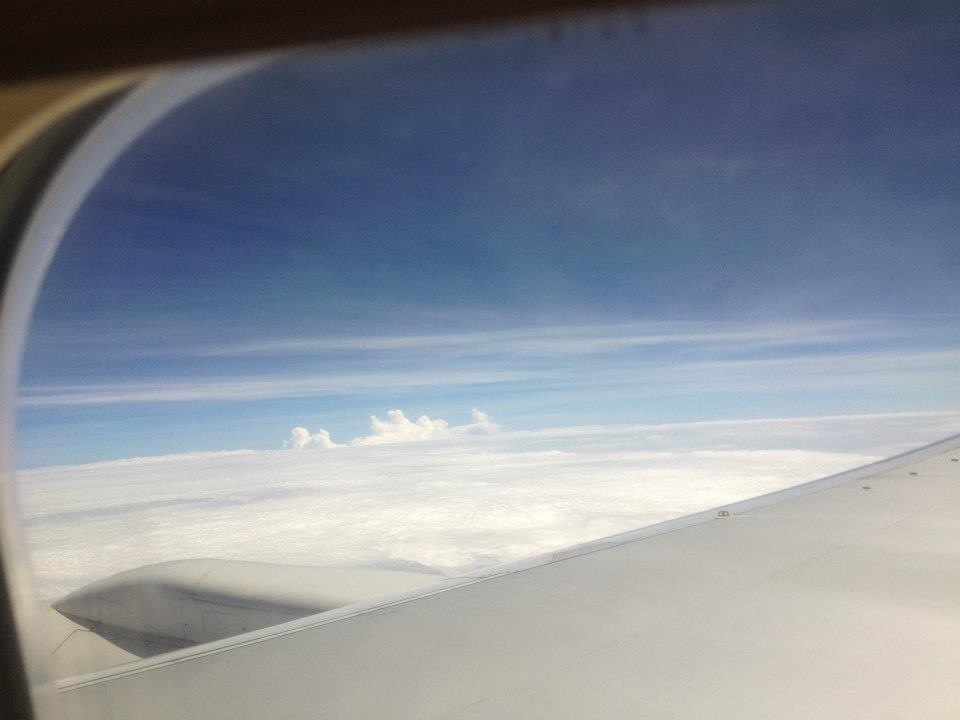