In previous posts, I spoke of the personality differences between my husband and myself. David likes to fill every moment of his vacation with all manner of entertainment, where I like to curl up in a quiet corner with a good book or simply sit and watch the world go by. He likes to arise well before dawn, eager and ready to face the day, where I would just as soon roll over and catch a few more hours of precious slumber, maybe have a leisurely breakfast on the balcony – when we’re lucky enough to have a balcony. For the most part, it works. He goes out at 5:00 a.m. to conquer the world, and I happily go back to sleep or relax with a Folger’s moment, mesmerized by the sea. He goes to the ship’s art auction, swigs the free cheap bubbly, and lays down money for some piece of art I probably won’t like, while I relocate myself to a poolside deck chair and continue what I came on a cruise to do in the first place – absolutely nothing! For the most part, this arrangement works very well – content to go off and do our own thing for a time and come together later over a drink, when he talks about the money he lost in the casino, and I discuss the variety of swimwear, the movie showing on the big screen, or the overabundance of chair hogs.

However, when it comes to picking a seat to watch an onboard show, there’s no sucharrangement. He wants to be where the actions is. I want to watch from a safe, comfortable distance away. We can’t exactly part ways at a show, so we enter the lounge or theater, and to my horror, he makes a beeline for the front row. I hate the front row! I prefer to remain anonymous and blend in with the crowd. I don’t want to risk becoming volunteer fodder to amuse an audience – no, thank you. I suppose I could move a few rows back and pretend to not know him, but that would be just plain mean. So I trail reluctantly behind him and shrink down as far as I am able in my seat in the hopes that I won’t be noticed. I plead with him one last time … really, we can see the show just fine back there, a safe distance away. Nope, not good enough. Only the front row will do. Doesn’t he realize that he’s going to be picked? Yes, of course he does – that’s the plan. My husband is a target. Some people wave and shout “pick me … Oh, please pick me!” David doesn’t have to. Maybe it’s his larger-than-life persona. Maybe it’s his fearless, confident demeanor or the way he stands out in a crowd. Maybe it’s the beard or the large balding head. Or a combination of the above. Whatever it is, it’s going to get him up on that stage. I guaranty if there is a shortage of hands, he’s going to be the guy to save the moment, and there goes my anonymity.

One memorable performance was the time he volunteered – yes, volunteered – to be the subject of a hypnotist, whose name escapes me, on board a Princess ship 10 years ago. I wish I still had the video, because it was a sight to behold. There was my husband, on stage, in a trance under the belief that he was none other than … Garth Brooks! I couldn’t believe my eyes … or my ears. He was in a trance of sorts, belting out some off-the-cuff country song, making it up as he went. The audience went wild. Little did they know that not only is David not a fan of country music, he had never even heard of Garth Brooks.

If that weren’t entertaining enough, there was the time when my darling husband was crowned “Mr. Grand Princess”. Oh my. Let me stress that this was not a volunteer gig. This time, he was the guy who stood out in the crowd. Oh, God, I thought … here comes the assistant cruise director … she’s coming for him. Oh no, not again. It was a cheesy guy version of a Miss America pageant, and the contestants were a wide assortment of age, shapes and sizes, ranging from young, lean and buff to old, chunky and flabby. Let me just say that the winner was not young, lean or very buff – but he was a good sport, and I wouldn’t trade him for any other Mr. Princess, grand or otherwise. It’s all very fuzzy now, but I think I remember a parade, a cardboard crown, and a lot of wild, inebriated people. It was all good fun – 10 years ago, anyway. 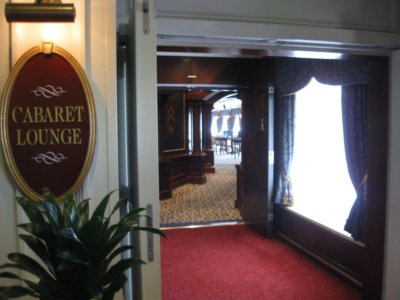