I am a planner, a researcher, a thinker. The majority will call it having an Obsessive Compulsive Disorder. I like to refer to it as just being prepared. What I have learned over my years of vacation planning is no matter how hard I try… nothing ever goes the way I plan it. (That in no way deters me from attempting another time. I am quite stubborn and persistent…. To put it mildly)

Our first trip to Galveston was our first cruise ever. The one where I totally tricked my husband into cruising after HE specifically said “no way, no how, not ever”…. So, we arrived in Galveston pissed off and not speaking to each other. Through some online travel/hotel thing I had booked a deal for a “Hotel on the Seawall”. What we got when we pulled up was something equivalent to the Motel 6 in the “hood” about 6 blocks away from the seawall. Perfect….just Perfect. But hey! They offer a free shuttle to the port ?

We checked in and hauled our bags up the stairs to the second floor. The room was okay… in a motel-ish sort of fashion. We decided the only thing that was going to improve this night was to just go see the ocean and get a beer. So we called a cab and headed out.

Down at the seawall, apparently there is not much of a “night life” so to speak. Every place we went was about to close at 10pm!! We gave up, called our cab and detoured through a convenience store for a 6 pack of beer and headed back to our “Hotel/Motel in the hood”.

Upon arriving back at our room we heard scuffling outside the door. It appears the 3 people in the room next door were having somewhat of an argument/mild domestic disturbance. They were quite friendly to us and were more than willing to share their dirty laundry, so we took our beer outside…. Sat down and watched the show. (Our front row seats to the knock off Jerry Springer show involved 1 girl, 2 boys … and shall we say “a sword fight”. Anyhoo…. We played Dr. Phil for a while and called it a night ? Suddenly, we were feeling much better about ourselves.

Another time we headed down to Galveston early and were cruising with our son and both of our mothers. That’s right … 2 MIL’s, me, hubby and a kid…. All in 1 van, headed down the road for a 5 hour trip. Approximately 3 hours into this little road trip my husband’s mother CALMLY says…. “I forgot my passport at home.” …. YOU MUST BE KIDDING?! Nope. There is nothing like turning around to go back home after 3 hours on the road. Our 5 hour road trip turned into 11!! (Side note) My mother in law claims to be psychic….. and you didn’t see that coming?! On this same trip she also left $400 worth of souvenirs on an excursion when she LEFT them on the tour bus! Now, I love my MIL and my parents aren’t perfect either… but scatter brained is putting it mildy! Thank goodness her son hasn’t inherited any of those traits….. yet.

Once again we attempted to go to Galveston early and it was like the wheels fell off the train! I got off work early so we were heading out earlier than planned. We were avoiding the high traffic times. Everyone was in a good mood… which never, ever happens! This was unheard of!

Then, 30 minutes down the road I checked my email and there it was… an email from Carnival. The boat is having propulsion issues and won’t arrive back in Galveston until 3:30pm. Do not proceed to the pier until 6pm. HOLY BANANAS! It was only a 4 day cruise and now we are basically missing almost a whole day! We had even purchased the Faster to the Fun so we could get on board as early as we could to start enjoying our vacation. So the grumbling ensued in the van. We decided to continue on instead of turning around and going back home. We had already booked an awesome hotel… The Hilton ON the seawall and got a room with a view of the ocean. (I was sure of it this time). We would just spend the day in Galveston… visit the beach, go to some museums… we’d make a day of it. Everyone was happy again... somewhat.

We arrived in Galveston at 10pm. Naturally, everything was closed. We even asked the young looking kid who took up our luggage “So where do you guys hang out for fun?” He just shrugged his shoulders. OK… “Where can we get something to eat?” His response… “You could order a pizza.” Perfect… we’ll do that. Pizza ordered. Trenton and Maw-Maw headed to their room. Hubby and I piled on the bed and turned on the TV to wait for our pizza. Phone Rings. It’s my mom saying the words you NEVER want to hear when you are on vacation. “Trenton is throwing up.”

So I go collect the kid and sure enough he is throwing up… every hour… all night long. He’s not normal by the way. He doesn’t act sick. He isn’t laying there lifeless. He is watching TV, playing on his ipod… keeping me awake and then “Oh… hold on. I’ll be right back.” So 7am comes, Trenton’s back in the bathroom and my husband looks at me and says “So what are you going to do?”

Like… I am the only one with the ability to solve this situation? I said “What are YOU going to do?” He says… “I am going to go to sleep.” HMPF

Fine. I called the front desk and asked for the nearest emergency clinic. There’s only 1 on the island. Awesome. Could you call me a cab please. (Mom is in her room with the car keys and not waking up) I jumped in the shower… then threw Trenton in to hose him off a little. Got us dressed and grabbed the trash can liner going out the door to go meet the cab. Bless that little cab driver’s heart. He took 1 look at Trenton, saw me carrying the trash can bag and kicked it into high gear! I am certain the cab was airborne at times. In no time at all we came to a screeching halt right in front of the door to the clinic ? We were in luck. There was NO wait. Went right in and thankfully the doc said he ate something bad the day before and should be at the end of the course. Thanks Roadhouse ?

We were cleared for cruising! He gave me a prescription of anti-nausea medicine just in case and sent us on our way! After that Trenton took a 4 hour nap at the hotel… Clearly we had time ? And was fine ever since.

So the REAL adventure came next. Our little 3 and now ½ day cruise upon the Carnival Triumph turned out to be one of the strangest of all. Complete with line cutting, head-butting, broken bottles of wine (none related to the other) …. And a really good time! ? 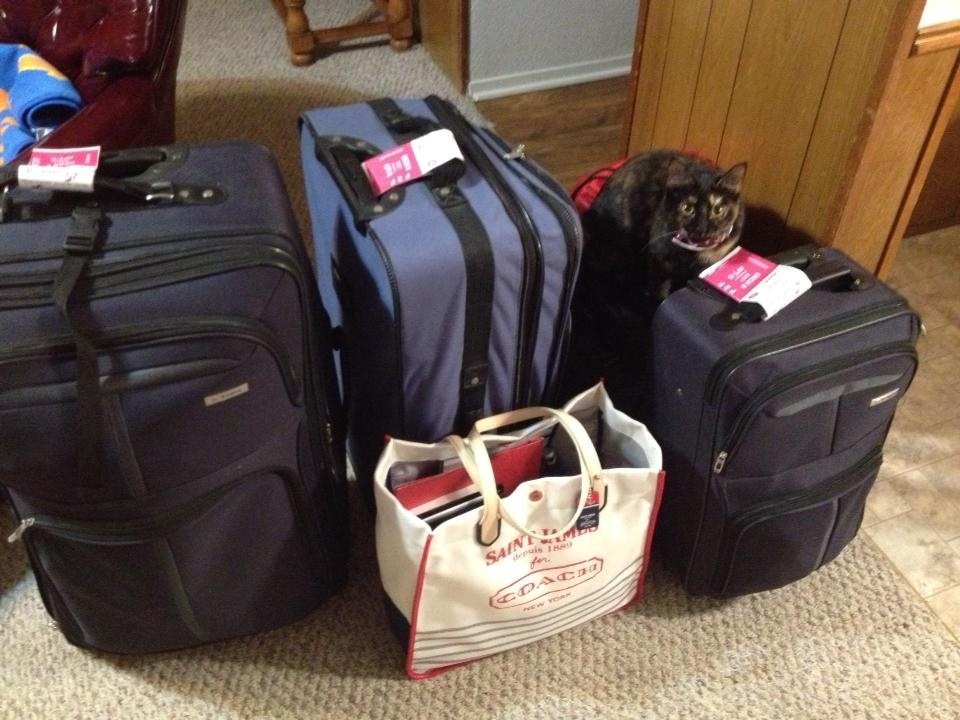