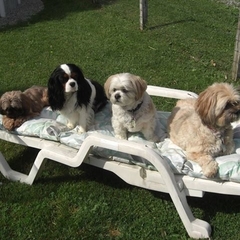 "All-in-all in was a super cruise...Mom and I had a great time and I wouldn't hesitate to do this cruise again."

This was my second cruise on the Zenith this year (my husband and I were on a 5 night cruise out of Miami in Feb). On this trip I took my 85 yr old mom and left DH home with the pups.

Since I wasn't sure about the long drive from Vermont we decided to stay at the Best Western Newark Airport. They have a stay/park/cruise rate (I think it was about $175 including tax). There was a shuttle from the hotel to the pier and a shuttle to pick us up after the cruise and take us back to the hotel to pick up the truck. The hotel was in an industrial type area with no stores or restaurants around it. There was a restaurant in the hotel for dinner and a good continental breakfast was included. Rooms were very large and clean enough so it worked out ok.

We were "upgraded" to the Carribean deck, room 6145 (inside room). This location was horrid...I believe the dining room was over us and around midnight or 1 a.m. it sounded like they were dragging chairs and tables across the floor every night! Our cabin steward was just ok...I had to ask for the tote bag and captain's club coupon book and CC coctail party invitation.

Food was great,as usual. Since we didn't bring formal clothes, we ate in the casual dining alternative. We had a super waiter, named Franco, who made meal times fun.

It was cloudy and cool when we left NJ but we had nice weather in Hamilton and St. George. The last day of the return trip was very rough and alot of the passengers and quite a few of the crew were seasick. I had Mom take Bonine before we set sail and she was fine...just had a little trouble walking because of the excessive ship movement. The last night we had thunderstorms and it was fascinating to see the lightning light up the bow on the ship bow cam on our television.

We didn't take any organized tours. In Hamilton we strolled through some of the shops and took the bus to Horseshoe Bay Beach. In St George we spent a morning at Tobacco Bay Beach ($4 PP cab ride) and then toured through the town.

Overall this was a rather odd cruise....mostly older passengers, who grumbled, complained and didn't seem to be enjoying the cruise much. Also, not a friendly group, overall....it was just different. I asked the woman at guest relations if it was just me or if this was just a not so happy group and she responded that "they just weren't very enthusiastic".

All-in-all in was a super cruise...Mom and I had a great time and I wouldn't hesitate to do this cruise again.